The Value of the Inner Circle 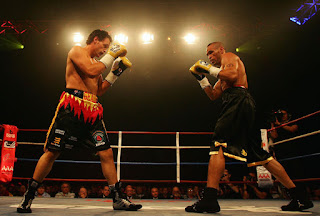 Last Night the world saw Anthony “The Man” Mundine challenge Daniel “The Real Deal” Geale for the IBF Title. Now moving away from the Human Headline that Mundine has become, the fight shows powerfully, the value of a good Inner Circle.

Mundine entered the ring with over-the-top fanfare surrounded by an entourage of  what seemed like hundred…there was indigenous dancing in the ring and a long ceremonial walk to the ring with the Man almost unseen amongst the Mundine throng.

Geale in stark contrast, came out quickly with only his trusted Inner Circle. Geale looked confident, while Mundine appeared to looked fierce and confronting…but in truth…. No doubt both boxers were prepared, but Geale looked more confident in his preparation.

The fight lasted the distance, and after every round the difference in the value the Inner Circle brought, became even more apparent. Geale’s team showedclass, as they attended to the champ. Insightful comments, telling him only what was needed, nursing his bruising as needed. They told it how it was, feedback was honest and Geale knew the current situation, what to stop doing, and effectively what to do better to win. His coach spoke, sometimes Geale would ask questions, communication was clear and consise.

In Mundine’s corner, the over the top hype was clearly evident. Three people attended to The Man, each shouting over the top to be heard, shouting out the Mundine Mantra. Three people in your ear…….The amazing thing was when Mundine spoke, they all appeared to agree with Mundine. The communication at best seemed to be of the old school hype, and hope for the best kind, but the most damning thing was that Mundine never gained an honest opinion on the current fight status, as they talked up his performance and himself.

Now history shows the poor grace the Mundine exhibited after the fight, with no respect shown for a true champion amid statements of being robbed and criticism of the judges. I will deal with the legacy that Mundine will leave, in other post.

Mundine’s Inner Circle did him no favours at all. There was obvious little value in the between rounds coaching. Surrounded by YES MEN, men who depend on this stMundine  for their jobs and roles, they had little choice but to deliver what Mundine wanted.Why would they be honest? Anthony Mundine, needed a better Inner Circle. His undoubted talent, alone, wasn’t enough to defeat the champ and his trusted few. I am reminded of a quote when I think of the Mundine camp and Inner Circle.

Mundine’s Inner Circle knew that honesty, constructive feedback was not what The Man wanted, so they dished up the drivel they did. We all saw the end result.

The Value of the Inner Circle. Trusted is needed, honesty is needed and Yes Men need not apply. Mundine won’t listen to this advice…Hope you do!

If you wish to work with Coach Curl to unleash your greatest self, contact Tony today.
Click Here
Coach Curl
PrevPreviousWhat’s Fencing You In?
NextTurning Impossible into I’m PossibleNext